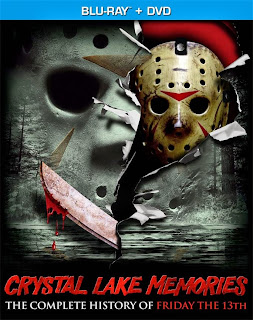 My favorite slasher franchise has always been Friday the 13th. For me, it started with seeing Parts 2 and 3 late at night on channel 32 in Chicago. Jason was terrifying, and the kills were gory. I really liked the character, and I eventually became a fan of the entire series. Crystal Lake Memories is an extensive documentary that focuses on every film in the franchise. They start it off right by having a campfire surrounded by young people. At the center is series alum Corey Feldman telling the tale of Camp Crystal Lake. Feldman narrates the documentary, which starts off just before the creation of the iconic first film.

The beginnings of the story are very interesting. Sean Cunningham flat out admits that he took the idea from Halloween. I thought that was great, but he didn't steal the masked killer idea. Instead, he took the shell of a slasher film and made the killer someone you could sympathize with. Yes, I'm talking about Pamela Voorhees, whose first name we don't even learn until it's written on a headstone in the fourth movie, but let's take a quick sidestep to compare Jason to Michael. Michael was evil from minute one. Cold blooded killers get no sympathy, and they shouldn't. Jason was a scared kid who drowned because of the negligence of some camp counselors. You feel for him, and you definitely feel for Pamela. Try to stop me from going on a murderous rampage if anything happens to my kid. Go ahead, try.


That's kind of the point, though. You should feel for poor Mrs. Voorhees. She lost her son. Nobody should have to deal with that. If it causes you to lose your mind, there isn't a person alive who would blame you. Sure, a killing spree might be extreme, especially when the victims aren't the people to blame, but I'm sure it's not an unreasonable scenario.

I'll happily point out the millions of continuity or mythology errors in this series, and lucky for you, so will the cast and crew. I love the attempt to explain how a boat got from Crystal Lake, which is in New Jersey, out to New York City. Hell, getting Jason into the picture as a fully grown adult is crazy enough, but I'm sure glad they figured it out.

Crystal Lake Memories breaks down each film in depth. The doc also looks at the Jason-free television show, Freddy vs. Jason, the reboot and the comic book series Freddy vs. Jason vs. Ash, which was supposed to be the FvJ sequel. You trek through the trials and tribulations faced by the different directors and cast members. You follow every actor that played Jason, including fan favorite Kane Hodder. Jason's dad gets a mention and a bit of an explanation. My favorite thing had to be the array of actors who regretted turning down sequels.

Though many cast members were interviewed, there were a few people obviously missing. The series did tear through some well-known people. Some of the more notable and recognizable actors in the films include: Kevin Bacon, Miguel Nunez, Crispin Glover, Shavar Ross (Dudley from Diff'rent Strokes), Ron Palillo, Tony Goldwyn, Alan Blumenfeld, Ann Ryerson,Terry Kaiser and Erin Grey.

If you are a Friday the 13th fan, this is a no-brainer. If you are a horror fan, watch this documentary. Yes, it's long, but with the amount of work put in, it is worth every minute. I'll be honest, it actually made me want to sit down and watch the reboot. I know, it's crazy. I refused to watch it until now, but to complete the run, I'll have to do it. Crystal Lake Memories is brilliant. Go get it now.
Abnormal Entertainment
Share