Urban legends of Haiti, tell of zonbi, which is what the western civilization calls zombie. It is essentially a corpse that woke from the dead, a living dead if you will. Said corpse is controlled by the priest who raised it from the grave; usually a voodoo priest or priestess, who can keep the zombie eternally as his/her slave.

The zombi word in English language literature goes back to The Unknown Painter which is a short story first published in 1838. Later, the letter “e” was added and the word became zombie. Also the mythology changed quite a lot, very liberally, and really quickly.

Now, this column will cover mostly U.S. films, and so it is appropriate to note that zombies first became of interest to American citizens during the occupation of Haiti (1915 – 1934), so it is no wonder that the living dead started appearing in film during the ‘30s. But first, they became famous thanks to William Seabrook's infamous The Magic Island book, about which I have heard and read so much, yet I’ve been able to track down a reasonably priced copy.

I’ve learned most of the above from Wikipedia (http://en.wikipedia.org/wiki/Zombie). There are many more studies published the last few years on the subject, and my favourite is Jamie Russell’s Book of the Dead: the Complete History of Zombie Cinema.

Through this new column I will try to catalogue and review every zombie movie made in U.S.A. and Europe, in chronological order. Serials and TV series will be ignored. It’s an insane task, but I’m too. 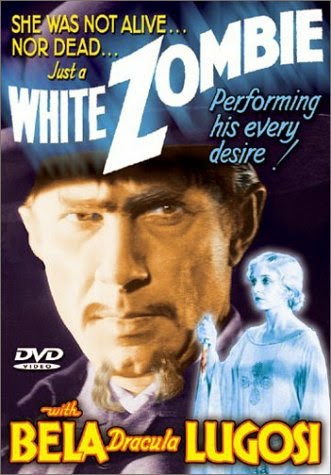 White Zombie (1932)
So much has been written about the first feature film to feature zombies... It is a low-budget affair shot in 11 days. It proved very influential (White Zombie, the band, anyone?) but not until the ‘60s when it was re-discovered (it was until then considered lost). The matte paintings look indeed very dated, but the whole thing is so good that you’ll probably be too engaged to it to notice.
A young couple [Madge Bellamy and John Harron] visit Haiti and very soon they will be surrounded by death as their journey temporarily stops at some funeral that was taking place in the middle of the road. They then meet Legendre [Bela Lugosi] who is backed up by zombies. The driver is acting fast and takes the couple away from him, but first Legendre manages to steal the young girl’s scarf. All this is happening in the first few seconds.
The couple visits Charles Beaumont [Robert Frazer from Black Dragons (1942)] who wants to steal the girl away from the boy and for this to happen he uses a magic potion that was made by Legendre. Said magic potion turns the poor girl into a walking corpse and Charles is not satisfied.

Legendre owns a mill in which zombies act as his slaves, but soon he’ll turn the couple into his servants too. The percussions beat to the rhythm of the dead. When the lead girl is under Legendre’s spell she sees her tormentor’s face in glass and says she saw death. But my favourite scene exhibiting this is the one in which she plays the piano and looks into the beyond, her eyes frozen literally like those of a corpse.
The ending is pretty impressive and has the leads facing Legendre and his legion of the dead. The bullets don’t seem able to stop them, but due to a trick they manage to defeat him (in the most spectacular fashion) and once he’s dead the spell is over and everything’s back to normal and the film wraps with smiles on the leads’ faces and the audience’s.
Bela Lugosi is one of my favourite actors. He was in many films from the ‘10s and ‘20s, but he found successes with Dracula (1931) which turned him into a horror movie icon [he made White Zombie (1932) straight after it]. My favourite two periods of his career are his ‘40s poverty row flicks as they are unexplainably charming and his ‘50s Ed Wood classics.

Revolt of the Zombies (1936)
Director Victor Halperin had box-office success with White Zombie (1932) so naturally the follow up was a horror movie with zombies in it. There was no Bela Lugosi in it, and the revolt of the zombies promised in the title and advertising campaign doesn’t happen until the last reel. But at least it happens, right?
The film kicks off with a scroll that tells us that many strange things happened in WWI, but the strangest of them all was when “...a regiment of French Cambodians from the vicinity of the Lost City in Angkor arrived on the Franco-Austrian front...” Next thing you know is scenes of soldiers in the battlefield shooting zombies; but as it is expected the bullets cannot harm the walking corpses.
From then on the film follows the adventures of a team of archaeologists on an expedition in Cambodia (yes, I know it sounds boring, but hang on) and what do you know they discover zombies (you see?)! Well, said zombies look like normal people on drugs (which won’t seem too far off if you’re familiar with the advertising industry). Those in the film are walking corpses though, and they are controlled by a pair of eyes in close-up. Those are the eyes of Bela Lugosi, taken from White Zombie (1932), so, okay, technically you can say there’s Bela Lugosi in it, but you’ll have to say the words “archival footage” first.
This is really not a good film by any stretch of the word and I found myself bored halfway through, but it is a historically important film; especially if you’re talking about trash film history. It is bad; and being in public domain, in black and white, and because it has zombies in it I thought I had a copy of it in my collection! I searched through tons of DVDs and couldn’t find it. After a few hours I decided to look it up on my excel document in which I list all flicks that enter my apartment. It wasn’t there. And then I realized I had committed the cardinal sin of not watching it (until now). I found it on YouTube and watching it was a really surreal experience. I mean, this is an ancient film, and I was struggling through pixels?

J'accuse! (1938)
A dead dove, a Jesus monument hanging upside down, bombarding, tears, dead soldiers; all signs of WWI. All signs of a war movie; a good one at that, but easily the most boring film in this list if you’re a horror fan, as the first “terror” setting happens 75 minutes well into the night and it is just some creepy rain. It is a war/horror hybrid and as such it is an anomaly, as those were not popular at the time, so I guess it is a historically important film.
If you are patient and you manage to wait for 107 minutes you’ll be rewarded because then the dead soldiers of the war arise from their graves and march (in horror movie style with a storm, editing effects, crosses disappearing from the graveyard etc). Some of those zombies’ make-up looks a lot like the Misfits’ famous Crimson Ghost (their trademark skull which has become very fashionable lately). The guy who resurrected the zombies is caught by a lynch mob and burned alive. The ending leaves things open though, but there was no sequel.

The Return of Doctor X (1939)
A famous actress [Lya Lys] is murdered just before a set interview. The reporter [Wayne Morris] finds her body stabbed in the heart. With the story in the front page the newspaper he works for goes to print. The police go to her hotel with him but they find no corpse. Next thing you know is she’s alive (even though she looks pale like dead) and suing the newspaper; and so does the hotel (for damaging the reputation of both).
A second murder happens, and what it has in common is that the victim’s blood type was the same with the starlet’s (oh and the body looks suspiciously pale). Now the reporter and his only doctor friend will try to connect the dots of the mystery, so if you haven’t seen the film stop reading now because major spoilers will follow.
Now the young actress dies for real, albeit of natural causes. You see the coroner says that her body was brought in by Dr. Francis Flegg [John Litel]. The leading duo discovers a similarity to Marshall Quesne [Humphrey Bogart who hated making the picture; the part was originally to be given to Boris Karloff] and a child slayer from the past that’s supposedly dead. They dig up his coffin and find nobody in there. They are one and the same!
Dr. Flagg demonstrates to the two nosy guys how he can resurrect a dead rabbit and says he can also do that to human beings. Yes, he resurrected Doctor X who is masquerading as Quesne (and is looking very pale). But his living dead specimens’ blood is not as good as the real stuff so they have to kill people that have the same type of blood in order to make a transfusion and stay alive.
This is the sequel to Michael Curtiz’s Doctor X (1932) with Lionel Atwill as the lead villain, which even though it is a better picture, it doesn’t concern us here, because there aren’t any zombies in it. The Return of Doctor X has a young actress, a pet, and even Humphrey Bogart as bloodthirsty zombies; not bad for a film made in the dawn of the ‘30s!
Christos Mouroukis
Share