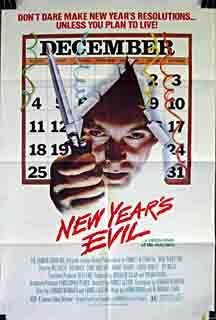 The concept is cool. A maniacal killer plans on killing someone in a different time zone from to at the stroke of midnight on New Year’s Eve. Unfortunately, the concept is all New Year’s Evil has going for it. Except for the unintentional comedy, that is. Come with me, dear reader, and travel across this fine country of ours from the hypodermic needle-laden beaches of the Pacific Ocean all the way to the condom-infested shores of the . We will see the country, the heartland, the major cities and the small towns… or maybe not. The whole while we will listen to Pinky Tuscadero’s punk rock New Year’s Slamdancing Eve Show and party to the sounds of mis-cast victims. Sing with me! May old acquaintance be forgot and hopefully this film, too! 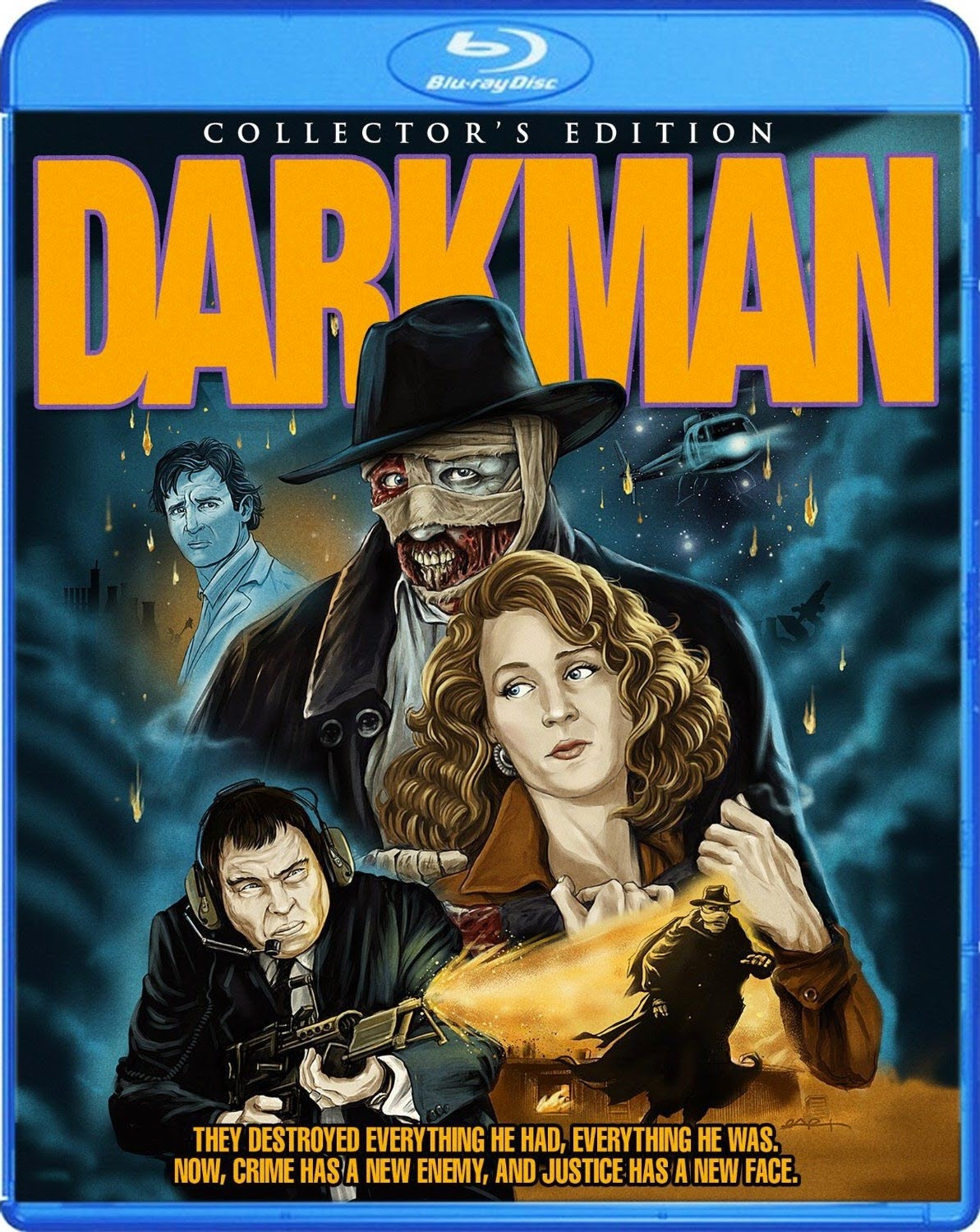 When Sam Raimi bursted on the horror scene in 1981 with the classic Evil Dead (1981), it was inevitable that respect for the talent of this young writer / director would bring Raimi a new level that would propel his career in the genre film ranks. The Evil Dead captivated horror fans all over the world and even caught the eye of the legendary Stephen King. Amazingly, it wasn’t until his 1987 sequel, Evil Dead II: Dead by Dawn where he really started to get his career into top gear. Just a couple years later Raimi was able to direct his most ambitious project at the time, the superhero / Phantom of the Opera mash-up Darkman. After the success of Darkman, Raimi’s career was given a new life that would make him into box office gold with the Spiderman trilogy.

Scream Factory has been no stranger in grabbing the right to some of the finer genre films from the past few decades. Fans of Darkman will be happy to know that thanks to Scream Factory and Shout! Factory you can now see Darkman looking better than ever in the High-def format with all kinds of fun supplementary materials.

Kevin and Jeff have a few beers and discuss their favorite movies of 2014. They also talk about a few events over the year in the entertainment world. 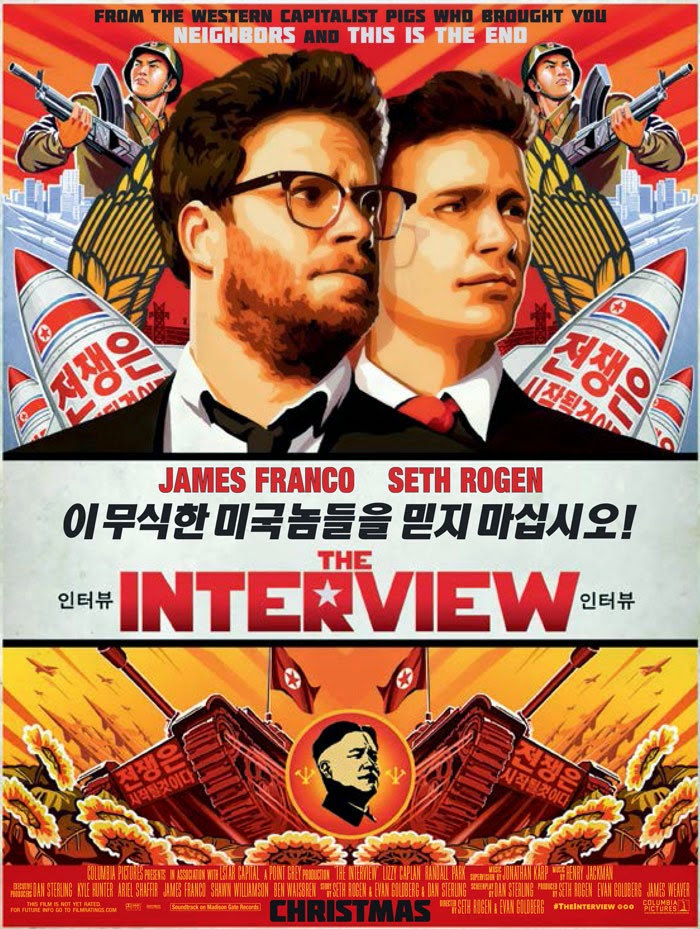 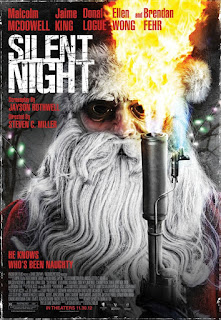 The Silent Night, Deadly Night series has been a pretty formidable franchise since the first movie debuted in 1984. The series has never been quite near the Halloween or the Friday the 13th series in box office receipts as most sequels went straight to video - but the killer Santa flicks accumulated a fan base worldwide. Naturally a remake was going to happen. Sure there are some good remakes but many of us horror geeks (especially over 30) hold our noses at the thought our movie’s legacies being tarnished. Director Steven C. Miller ( The Aggression Scale) and writer Jayson Rothwell take the challenge with their re-imagining Silent Night.

It's Christmas Eve and bodies seem to be piling up all over for a small town in Wisconsin. This maniac has certain targets in mind - fornicators, snotty kids, pornographers and lecherous priests are at the top of his list. Finding out just who is behind these brutal killings is up to a young officer named Audrey Bradimore (Jaime King, My Bloody Valentine and Mother's Day remakes). With the help of Sheriff Cooper (played by the incomparable, Malcolm McDowell) the duo scope out the town so the killer Santa Claus doesn't slaughter anymore victims. 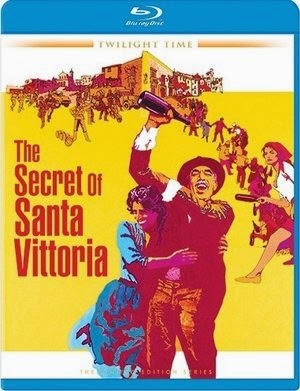 The year is 1943 and fascist dictator Benito Mussolini has met his bullet-ridden fate. The Italian mountain town of Santa Vittoria has largely escaped the ravages of World War II. Bombolini (Anthony Quinn), the town drunk begins to erase his pro-Mussolini graffiti off the town water tower and has to be coaxed down. The town's fascist sympathizers, fearing bloody reprisals from the villagers, hastily make Bombolini the town's mayor, much to the chagrin of his overbearing fish wife Rosa (who else but Anna Magnani). The still drunken Bombolini surprisingly institutes much positive change in the town. Word reaches his ears that a Nazi contingent, led by Captain von Prum (Hardy Kruger) will arrive shortly, to confiscate the town's only asset, millions of bottles of wine. Bombolini convinces the villagers to transfer the countless bottles of wine to a nearby mountain stronghold by hand (lots of spectacular footage here). When the Nazis arrive, will the village give a united front that there is no more wine left in town …?

The Secret of Santa Vittoria is a most welcome surprise. Directed by Stanley Kramer, it's possibly the sunniest and most carefree movie ever involving Italy in the throes of World War II. (The definitive filmed retelling on the effects of fascist Italy on small town life remains Federico Fellini's Amacord (1975), but that's neither here nor there –) The emphasis on this film, in spite of its many scenes of spectacle in wide-screen photography, is Quinn's struggle to redeem himself. The elements driving the conflict at large are still there. The villainous fascists remain present, still trying to hold their influence on the townspeople. But as it has been noted elsewhere, the character of Captain von Krum is the nicest Nazi this side of TV's “Hogan's Heroes.” As played by Kruger, it appears that this soldier is very much aware that the Axis is rapidly disintegrating, and is chiefly there to quaff some regional spirits and chase some Italian skirt about. T must be noted that some of the fascists meet their comeuppance in an ironic way, but this is all kept off-screen. 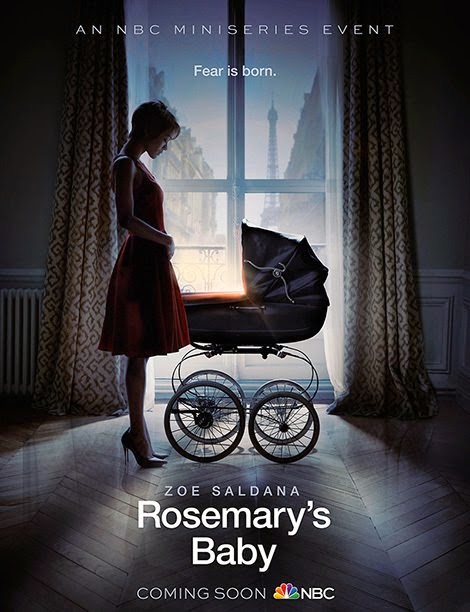 Trust me. If this remake hadn’t been included in my latest CHC package, I never would have watched it. It’s not necessarily a film that makes me want to gouge my eyes out with a spork previously used by a leper with herpes but it’s not something I would recommend anyone else watch. Ever.

Rosemary’s Baby, for those of you that don’t know, was a narrow book written by Ira Levin in 1967. It was originally adapted for the screen in 1968 starring Mia Farrow, John Cassavetes, Ruth Gordon, and directed by Roman Polanski. The basic premise of the story is as follows (again, for you newbs - spoilers ahead):

Rosemary and Guy Woodhouse move into a high rise apartment building. Quickly befriended by an older couple, Minnie and Roman Castevet, who seem to be benefactors and meddlers at the same time. Guy is a struggling actor but things quickly fall into place for his success, mainly by the competition going inexplicably blind. Coincidence this happens AFTER Guy befriends the old couple? Wait and see, young viewer.

Guy and Rosemary decide to have a baby and on the night of conception, Rosemary is drugged and hallucinates being raped by a demon. Or does she? Now pregnant, her first few months are agony - constant pain, nausea, weight loss. Though her friends try to convince her to seek help, she trusts the advice of the doctor recommended by the Castevets. When her pregnancy improves, she seems to forget about all her previous worries. 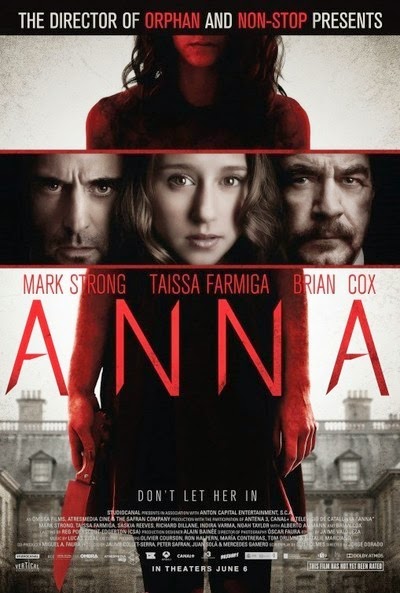 “Memories can’t be trusted but it’s all the truth we have.” Based on a true story... Just kidding. This flick isn’t based on anything real. If it were, we’d all be so far up shit creek I can’t even think of a funny punchline.

Anna is a present day story but in this reality, the world has something called Memory Detectives. There are certain people who can enter the memories of others. This is particularly helpful when trying to solve crime. Granted, the found memories don’t hold a lot of weight in court (which they tell us a bazillion times) as DNA is truly the best evidence but they can play key roles in finding out hidden truths.

John is one of these detectives. His boss, Sebastian, brings him in on an old case involving a young girl named Anna. Sebastian treated her years ago, when she was just barely out of knickers (or whatever the female equivalent is of a boy from the 1920s) but could not help her. She’s now gone on a hunger strike and her parents are desperate. 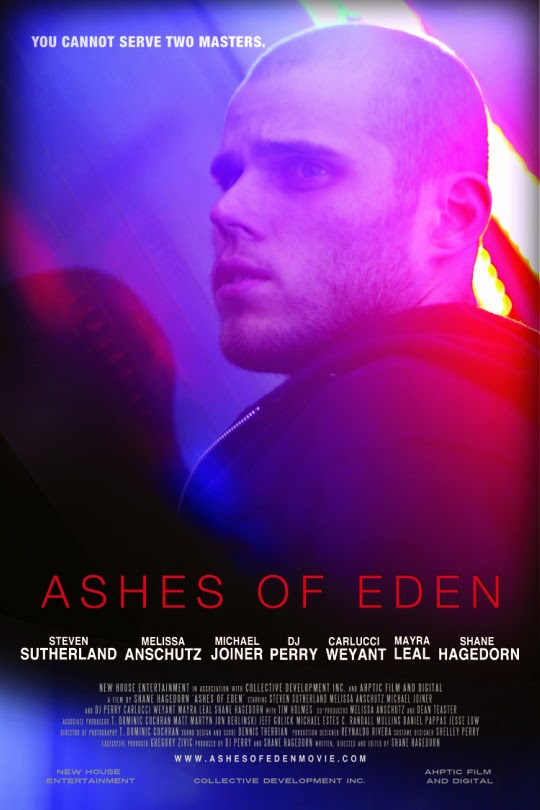 Playing out like a gritty, urban and modern Les Miserables, Ashes of Eden tells the story of Red (Steven Sutherland), a troubled kid that is generally in the wrong place at the wrong time. He wants to do the right thing, but the world of this story is not black and white. In order to help his police officer mother (Melissa Anschutz) from financial disaster, Red makes the wrong choice to steal from ruthless drug dealers and gets wrapped up in the brutal world that two rival dealers (Carlucci Weylant and indie stalwart D. J. Perry) have created. Red’s life will never be the same.
David C. Hayes No comments:
Share 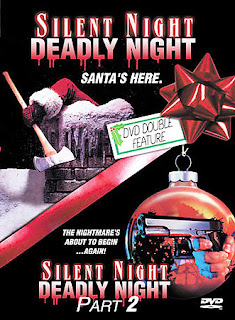