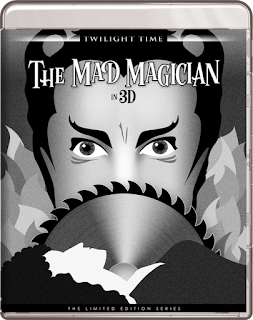 Reviewed By: Hal Astell
If you're going to make a movie in 1954 about a tortured artist screwed over by life, who could you possibly cast in the lead but Vincent Price? He's Don Gallico, known as Gallico the Great, but only recently as he's previously been a designer of illusions for other magicians, working for a company called Illusions, Inc. Unfortunately he's an artist, a genius even, but he's hardly a businessman. As his first show is closed down by court injunction by Ross Ormond, his own employer at Illusions, inc, he discovers that Ormond owns him and everything he creates, even when designed and made in his own time. Not much has changed in the entertainment business over the last fifty years, it seems.

Price is great here as the artist driven mad by those who seek only to exploit his genius, but then that's hardly surprising to us looking back because it's precisely what we see him as. In 1954 when this was a brand new 3D movie (and it later became the first 3D movie to be shown on television), Price was still new in the horror game. He had plenty of solid credits behind him but the first horror picture was only a year earlier in 1953. Given that it was the massively successful House of Wax about, yes, an artist driven mad, this one must have been a decent consolidation of his new reputation as a master of the macabre, and we know how that built.

He works his way through the whole gamut of character steps here: the meek employee stepping out own his own; the jealous man whose wife was also stolen by his employer; the violent man who, when pushed too far, becomes a murderer; the good man who regrets what he's done; the bad man who takes advantage of it; the crazy man who takes the inevitable steps when he's found out. Vincent Price was always best with that unsure look of internal torment with all its many facets and he gets to show it a few times here.

The film isn't long, only an hour and twelve minutes, but it's paced well and there's able support. I last saw Mary Murphy in The Desperate Hours, Humphrey Bogart's last gangster movie, playing the daughter of a terrorised family, but she's most remembered for her part opposite Marlon Brando in The Wild One. She was fine there but to my mind fits best here as Karen Lee: as a beautiful young ingenue who unfortunately doesn't have much to do other than be an ingenue.

Eva Gabor has a small part as the former wife of both Gallico and Ormond, who has been spending most of her time running around Europe spending money. She's good but then it can't have been much of a stretch. Patrick O'Neal is a policeman friend of Karen Lee's who ends up investigating the murders and he's believable both as a good and sympathetic man and a tenacious detective. Possibly best of all is Lenita Lane as Alice Prentiss, a mystery writer who lets a room in which one murder is committed and who lends her amateur talents to the investigation. Interestingly while she made very few films after 1942, the last two were with Vincent Price: this one and The Bat, made five years later. The connection really isn't Price though but Crane Wilbur, who was Lane's husband and who either directed or wrote (as here) all her later films.

At the end of the day, this could easily be described as a run of the mill Vincent Price yarn and there's some validity to that, especially given that all the 3D scenes look completely stupid without the knowledge that they would be far better in the proper environment. It has a charm though that survives to this day and while it's hardly one of his undying classics, it stands as a worthy successor to House of Wax.


I'm just amazed that it took another four years for him to return to the genre with The Fly, which was what really made him the horror star he would become almost entirely known as. From that point most of his film roles were horror stories: from The Fly to House on Haunted Hill to The Tingler to Return of the Fly to The Bat to House of Usher and onwards, with only one circus movie (with Peter Lorre) in between them.
Jeff
Share