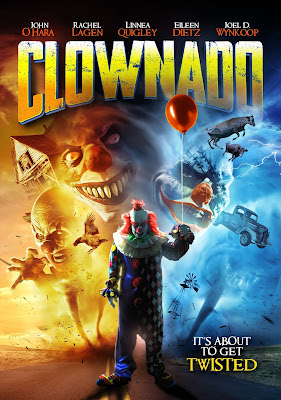 I’m not exactly sure when the tipping point came in the horror/comedy genre, where filmmakers felt the need to incorporate weather phenomena into EVERY FUCKING STORYLINE that involved some kind of predatory animal, usually sharks. Well, not to be outdone, the carnival circuit wants in on the fun, too, and so we have...

Writer, director, and editor, Todd Sheets, brings us the tale of a traveling circus and its troupe of murderous clowns. Head clown, and circus owner, Big Ronnie, finds his darling wife, Savanna,  having an affair with Cash (a guy, not a pile of currency). The two are planning to rob the circus, then run away to start a new life together with their unborn baby. As you might imagine, Ronnie has a problem with that plan. He murders Cash, but keeps Savanna around to humiliate and abuse her.

Well, Savanna ain’t having that shit, so she asks her friend to perform a spell to trap Ronnie and his clown crew in a giant tornado. Might have been more generic, as in ‘get rid of that asshole for me’ but that’s how the magic interpreted it. Either way...it’s a weird way to go. However, it works. The group is swept up into Mother Nature’s vacuum cleaner, and Savanna hits the road, hoping to never see Ronnie again.

Unfortunately, she can’t run far enough. The clownado rips across the country, wreaking havoc and killing everyone, as the clowns seek revenge against the woman who cursed them.

*wipes hand across face*  Where do I begin...

The problem with films that have a multitasking crew member (writer, director, and editor comes to mind...) is that one, or all, of those jobs are weaker for it. To me, the editing and writing have suffered here. The film looks and feels choppy, particularly during the kills. Editing is a great way to save funds on special effects and whatnot, but maybe a separately dedicated editor could have done a better job, and made me feel less seasick.

The general story itself is clear, but Todd adds in way too many moving parts. Character  development is rushed and incomplete; plot holes abound, or aspects to the cursed clowns are brought up once then never explored; and the whole idea that the heroes need to stop the tornado itself to end the killer clowns’ destructive spree, but once the clowns are killed off by good old-fashioned guns or some stabby-stabby with a knife, then the absolutely ridiculous “scientific” method of ending the tornado becomes a moot point, doesn’t it?

The dialogue is so cringe worthy. A lot of similes and metaphors are thrown around, and the cadence is more in line with the noir gangster films of the 1940s (or Rocky from Bugs Bunny). In line with that, the acting is (wait for it....) less than stellar. It’s not the most horrible I’ve seen; I never felt the need to turn off the film because the performances were so terrible, except perhaps during Big Ronnie’s scenes. I don’t know if he was trying to channel The Joker (whichever incarnation you want to imagine, or maybe all of them) but he chewed up his scenes with more gusto than a rabid hyena.

And, unfortunately, the ninety seconds of screen time Linnea Quigley brought to the bar owner character was not enough to save...anything. Neither did the gratuitous naked titties, nor the lesbian make-out sesh.

Now, all that said, there are a few things I did enjoy. The kills are about 95% practical effects. There are a few blood splatters that are CGI, along with the storm footage and the final kill, but the rest is a good mixture of rubber, silicone, fake blood, and gooshy stuff to entertain, even in their “that’s not how the human body is built or works but whatevs” extremity.

And there were two points in the film where I laughed out loud. This is a comedy, so it was planned that way, I’m sure, though most of the humor was more dad than pro comedian. One joke: “This storm is nastier than a $2 hooker on $1 Thursdays.” And just near the end, as the survivors each pop out from behind a wall, in time with an accent in the music, felt very Three Stooges - and I mean that in the best way possible.

Overall, this is a pretty shit film. Maybe if the clowns had been left on the ground and just traveled around being nefarious, it would have been better. I feel like the tornado aspect put a damper on something that could have been more interesting and less trend-whoring. The dissonance between the subject matter and dialogue was too jarring to work well. And the underdeveloped characters floundered in an over complicated and unbelievable story (and that’s leaving out the clowns-traveling-in-a-tornado thing).

I say skip it.


Get books, comics, graphic novels and more at bunny17media.com. Use the code CHC at checkout for 15% off your purchase!

You can support Cinema Head Cheese and Abnormal Entertainment on our Support Us page.
PeggyC
Share