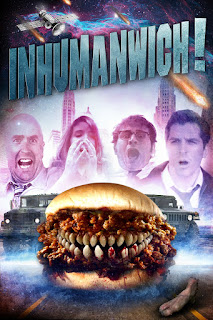 About 98% of the time I watch modern, indie horror films, I’m disappointed. The kind of disappointment your mother feels whenever you leave the house in your cut off sweats, the raggedy-ass Iron Maiden t-shirt from high school, and that damned baseball cap you got free for being the millionth customer at the local Choke and Puke.

So what about the other 2%? That, my friends, is an ever-widening circle that’s filling with pleasant surprises and genuine delight at the few indie horror movies I’ve enjoyed. I’m actually  starting to compile a list of these films, as I think they will deserve a future shout out.

And this film, ridiculously titled but so apropos, has made that 2% list.

Inhumanwich tells us the story of Joe Neuman, astronaut extraordinaire, flying in a rocket that employs the latest in artificial gravity technology. When it’s functioning, he can engage in all sorts of activities normally impossible in zero-gravity space, including eating his favorite sandwich, a Sloppy Joe. Unfortunately, this new tech is powered with radioactive materials and, as you might guess, something goes wrong.

After the rocket is pummeled by meteors, the artificial gravity device ruptures, and radioactive material leaks into the cockpit. In the resulting tumult, Joe falls on top of his Sloppy Joe, right smack dab in the middle of a puddle of Danger Fluid, as the capsule crashes to earth. Joe mutates into a giant blob of meat that devours everything and everyone it his path.

It’s up to the crack scientists and analysts back at the space shop to figure out what the hell happened, and how to stop Joe’s ravenous rampage!

This is one of those films where you can tell the people making it are just having the time of their lives. I don’t think anyone planned to make a movie that was groundbreaking, thought-provoking, life changing, or explored any deep thoughts of human nature. This was 100% pure entertainment. (think Blown, with CHC’s very own Kevin Moyers, Jeff Dolniak, and David Hayes)

It’s shot in black and white, so it has a nice throw-back feel to the monster movies of the fifties and sixties. The dialogue is super corny, which also adds to the vintage feel. The jokes themselves don’t just poke at the Velveeta cheese humor, but goes so far as to make that chili cheese dip from the commercials, and everyone swims in it with great gusto. In fact, I had to pause the movie TWICE because I was laughing so hard. 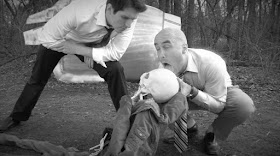 The sound, editing, and cinematography are of a much higher quality than I expected. So often the sound effects are louder than the dialogue; editing is sloppy; and many film makers don’t know what cinematography is, let alone know how to execute it. This film was well made from start to finish.

Now, does that mean it has no flaws? What, are you new here or something?

Most of the acting is pretty bad. The top three characters – Ed Farley (Matt Laumann), Dr. Chang (Michael Peake), and Floyd (Jack Burrows) – were the best of the bunch. Lisa Neuman (Kayla Clark) wasn’t too bad, and she actually stole a scene where she never spoke, but kneed an overzealous soldier in the nuts. Most everyone else was over-acting, just there as a favor to the filmmakers, or so awkward he kept half smiling at every line of dialogue or looked into the camera. coughcoughMattSpahrcoughcough. But in indie horror, I don’t really expect Gary Oldman levels of talent, you know?

The CGI is, obviously, terrible. But even in low-budget, I’ve seen better. I can only speculate they did that on purpose. Gods know the technology of the classic monster movies is rather crap, so it could be a nod to that. Or it was the best they could afford and has nothing whatsoever to do with nostalgia or paying homage to the bygone era of film.

I don’t want to end on a negative, so I’ll share with you one of my favorite jokes from the movie (I’d spoil the climactic ending if I shared my second favorite):

Lisa finally arrives at the space institute after hearing about Joe’s accident:
“I got here as fast as I could.” “Well, maybe you should try harder next time.”

Maybe that doesn’t sound super hilarious delivered so dryly on paper, but trust me, within the context of the film, it’s HIGH-larious.


Get books, comics, graphic novels and more at bunny17media.com. Use the code CHC at checkout for 15% off your purchase!

You can support Cinema Head Cheese and Abnormal Entertainment on our Support Us page.
PeggyC
Share