Five-year-old Olivia lives with her prostitute mom (Bibbe Hansen) in a rathole apartment near London Bridge. She later views her mother’s brutal murder at the hands of a john through a keyhole while refusing help. Olivia (Suzanna Love, Mrs. Ulli Lommel) grows up to be a young housewife, routinely abused by her mechanic husband (Jeff Winchester). Still residing in the shadows of the bridge, she is drawn to the prostitutes who regularly congregate there. On a whim, she dresses up as a hooker and lures a customer back to his mannequin-strewn apartment (similar to Joe Spinell’s digs in Maniac, 1981) and kills him. In the meantime, architect Mike Grant (Robert walker, Jr.) works with local authorities to relocate part of London Bridge to Lake Havsu, Arizona as part of a planned community and tourist attraction. While scouting locations, Mike becomes entranced with Olivia’s prostitute persona, and the two begin an affair. Olivia’s husband catches wind of the affair and angrily confront Olivia and Mike at the bridge, and is thrown into the Thames and is presumed drowned. Overcome by emotion, Olivia runs tearfully away … 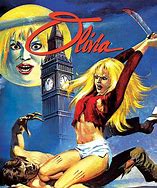 Until four years later, when Mike, after successfully transporting the bridge to Arizona, takes note of a young real estate agent (love in her natural brown locks). Confronting her, Olivia confesses her masquerade and begins sporting her stringy blonde locks and slinky clothes in order to please Mike. Things are going just swell, but as usual a menacing figure from her violent past returns.

Director Lommel began as an actor in Werner Fassbinder’s films, his directorial debut being the exceptional serial killer film Tenderness of the Wolves in 1973. He would migrate to the United States and make the striking The Boogey Man in 1981. Olivia, also known variously as Prozzie and Double Jeopardy is generally considered his last great film before he descended into execrable shot-on-video horrors before his death in 2017 at the age of 72.

As can be expected, Olivia takes Alfred Hitchcock’s Vertigo (1958) and mashes together bits of other thrillers popular of that era. What is remarkable is that it seems to have indirectly influenced the works of later films by other directors … Olivia’s hooker drag seems to have inspired Kathleen Turner’s China Blue character in Ken Russell’s Crimes of Passion (1985). Working with less than peanuts, Lommel here expertly mixes up an atmosphere of dread, lust and eroticism and makes his budgetary limitations work for him. Using no less than five cinematographers, Olivia looks great, contrasting dreary London exteriors with the desert beauty of Arizona. The film’s finest feature is Joel Goldsmith’s music score, mixing in ominous synth soundscapes with delightful piano concertos. This cries out for a separate music release! While Vinegar Syndrome has done a stellar job with its restoration (including a knockout limited slipcover edition) by its own admission, parts of the audio was sourced from VHS sources, leading to some muffled moments and dropout.

Extras on the DVD/Blu-Ray release include “Becoming Olivia,” a fascinating interview with Lommel’s former muse and ex-wife, who offers tidbit on the director’s traumatic childhood and how it informed his work. Another interview, “Taking on Many Roles,” with screenwriter John P. Marsh explains the creative processes used by both him and Lommel and how he was called upon to be an art director later on in the project. “A Chance Meeting” features cinematographer Jon Kranhouse and how he had to wring lighting miracles out of thin air. “Learning from Ulli,” a chat with the film’s editor Terrell Tannen sums up the fact from the previous interviewees that one worked with Lommel for the fun and the experience, and not for the money and details one of the director’s ethically challenged, “creative financing” techniques.

The packed DVD and Blu-Ray combo also includes Super-8 behind the scenes footage and the film’s theatrical trailer under the Double Jeopardy title. Fans of the unusual and marginal should make Olivia an essential purchase.

Get books, comics, graphic novels and more at bunny17media.com. Use the code CHC at checkout for 15% off your purchase!

You can support Cinema Head Cheese and Abnormal Entertainment on our Support Us page.
Greg Goodsell
Share